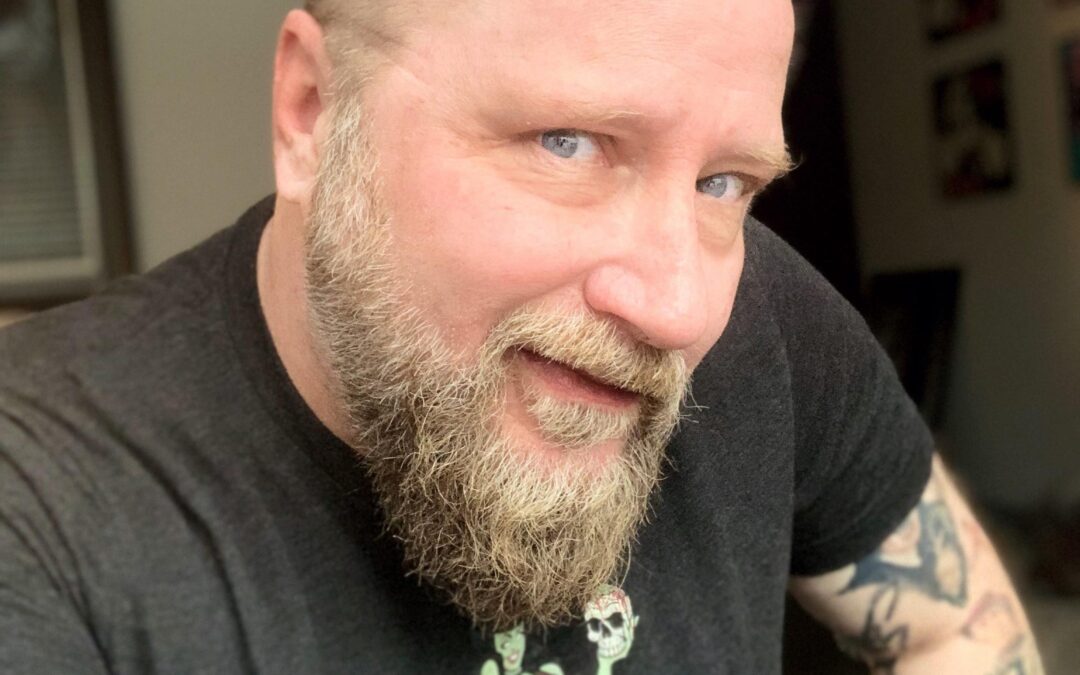 Tell us a little bit about your background?

I have been working in the entertainment industry since 1987, when I relocated from NYC to Los Angeles as a graphic designer. I’ve worked at Universal, 20th Century Fox and have been on my own for 19 years, working for the past 18 with Warner Bros. in their home entertainment division. I also design the packaging for Synapse Films, a small studio that releases cult and horror films, which of course I love. Though my favorite designs are still the DVDs I did for the three seasons of the original “Wonder Woman” with Lynda Carter.

Tell us about the “Haunt” community and how you got involved in it.

The “haunt” community is larger than you would think…..comprising of haunt owners, their building and behind-the-scenes crews and the actors. I got involved about 9 years ago when I moved to Indianapolis and went to a haunt there, expecting it to be blah, since I arrogantly figured how could a smaller haunt scare me when I was used to Knott’s Scary Farm and Universal Horror Nights. Well, let me tell ya, I had the shit scared out of me. I was so impressed…..but something happened at this haunt….after me and my two friends went through, this man comes up to us and asked if we would like to go through again, comped and VIP…..I was like “Well, okay!” We did, and on the drive home, one of my friends said “did you hear that actor say ‘fags’ as we went past him?” I did not as I don’t have the best hearing. Anyway, that actor was not there the second time we went through….and that stuck with me……fast forward to the start of the next year and that haunt changed it’s name back to “Nightmare on Edgewood” (it was “Southside Massacre” when we went through). I emailed the owner and introduced myself, told them how much I loved their haunt and asked if they needed a new logo design. They were baffled by this, but said “sure” and a friendship/working relationship was born. I later told them what happened when I went thru, and they said they don’t put up with that kind of behavior, and most likely another actor told them and the actor who said “fag” was fired immediately. (I also discovered the guy who offered us to go thru again was one of the owners). And that was my introduction into the haunt industry. 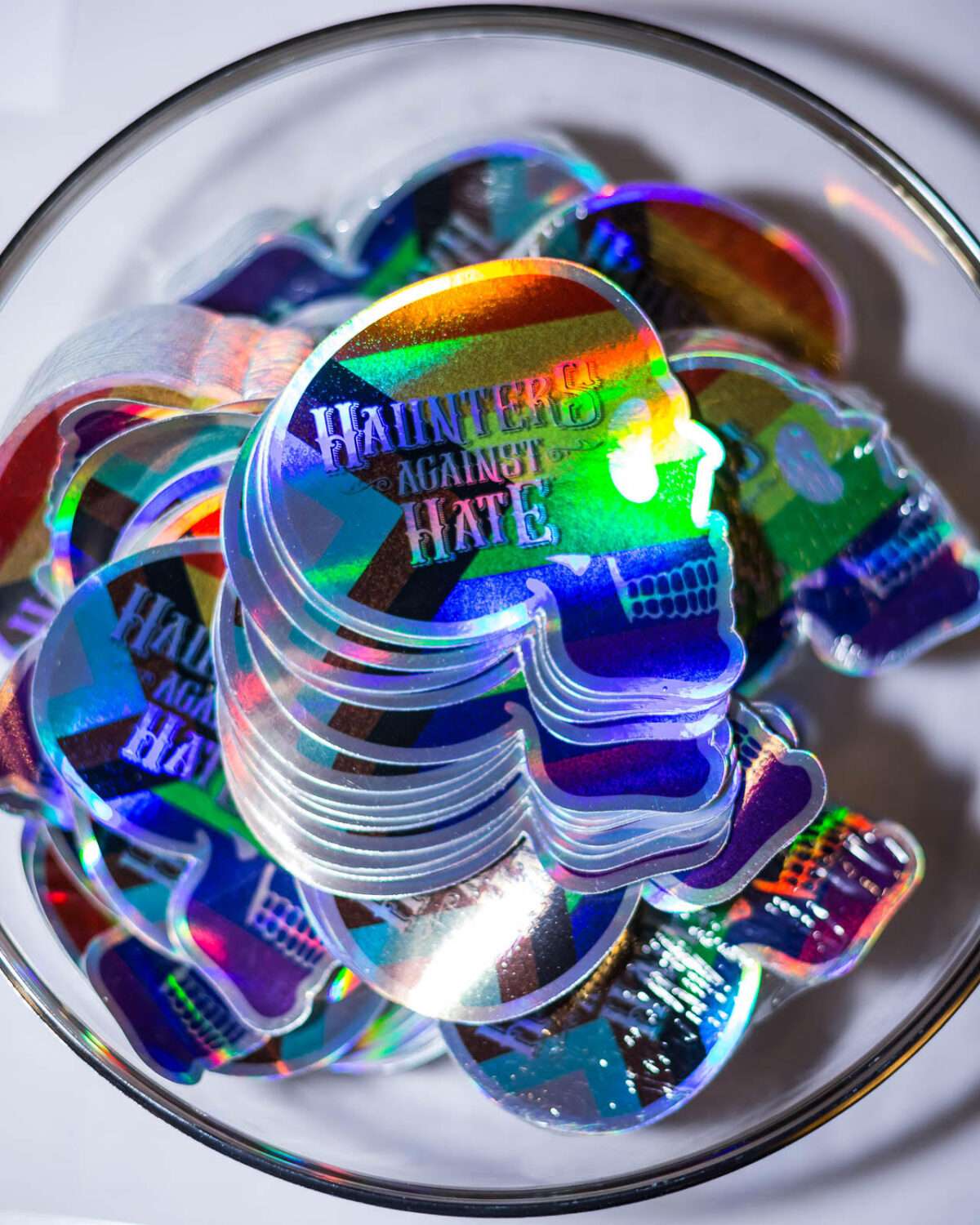 How did Haunters Against Get started?

Haunters Against Hate was formed under rather unpleasant circumstances. After the Orlando Pulse massacre, a haunted house review team out of Ohio made some rather nasty comments on social media saying how they could recommend some fags that should have been killed…..this caused a haunt owner out of Louisville to email a bunch of us (I was not an owner but doing advertising for several haunts at that point) and say he was not allowing them to review or attend his haunt anymore. Approximately 22 haunts joined with him, and I created the name Haunters Against Hate, the design and the tagline “because hate is the scariest thing of all.” An open letter was posted on social media informing the review team of this….as word spread, many haunts from around the country endorsed the cause and wanted to part of it. So I created a website where I could add these haunts as allies. The original haunts figured the open letter was the end of it. But I couldn’t let it go. I wanted to take something so negative and turn it into something good. So I created a tshirt and attended a haunted house convention in hopes of selling a couple of hundred dollars worth of tshirts that I could then donate to an LGBTQ organization. To my surprise, I ended up selling over $1,000 worth of tshirts. So I knew I had to keep going with HAH. 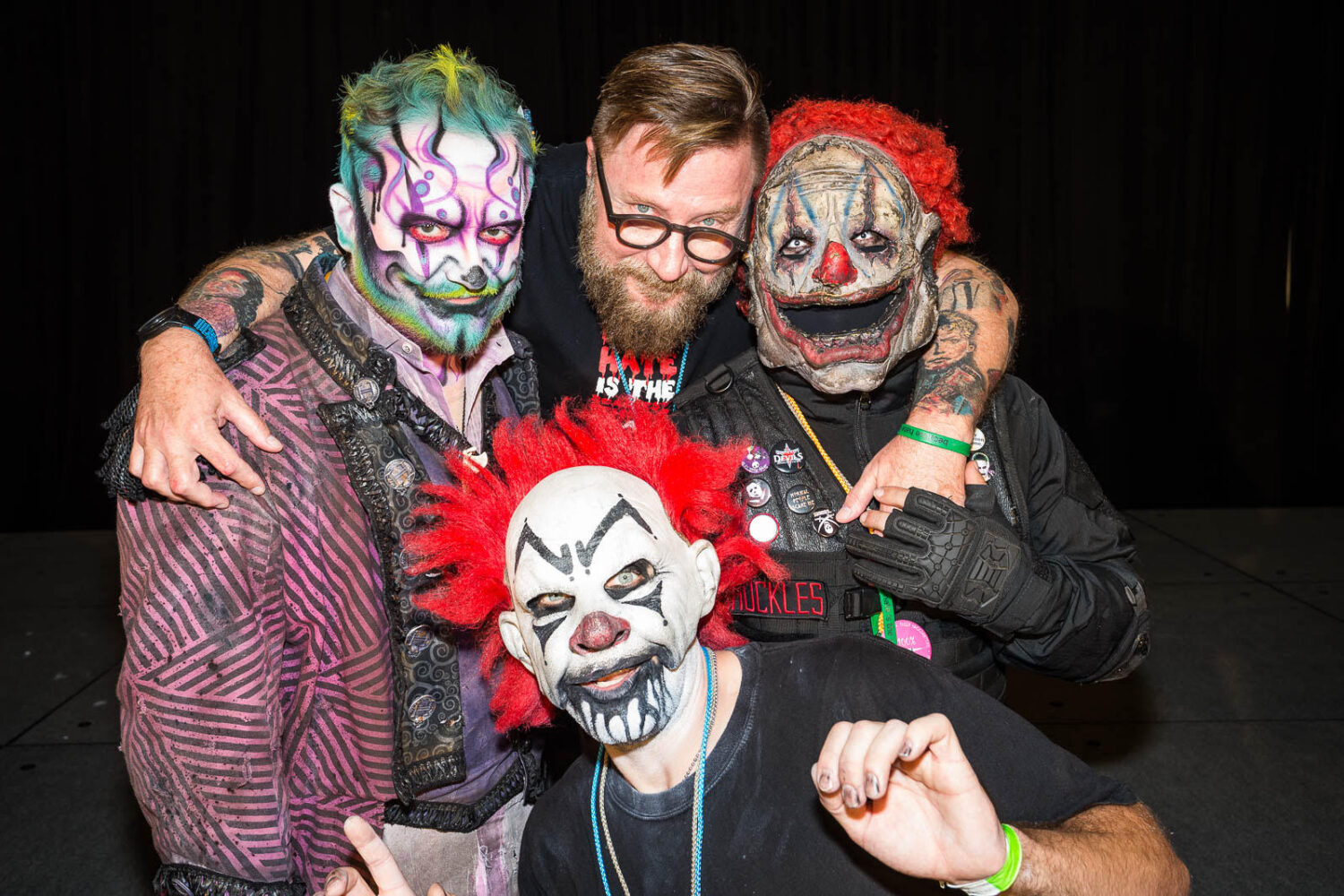 How do you help LGBTQ+ youth organizations?

With the sales of tshirts, pins, patches, and a series of coffee table books I’ve created called “The Book of Haunters” (which features haunters around the world and their stories of how they got into the haunt industry), I donate all profits to various LGBTQ organizations around the country, focusing mostly on youth. Usually a haunter will suggest an organization they know of, or I will research and reach out to an organization that is near a haunt that is part of HAH and go from there. So I’ve been able to donate to organizations from VA to CA. But it’s also the small things that keep me moving…like a father coming up to me a haunt convention and saying how, because of The Book of Haunters, his teenage daughter had the courage to come out to him. Or receiving an email from a teen saying how they met me at a convention, and just by me giving them a pin, helped them to accept themselves and feel more empowered. THAT is what it is all about. I still get a lump in my throat by some of the messages I’ve received from parents or teens saying ‘thank you.’5. During the season, haunts will contact me to have special Haunters Against Hate nights….where I go to their haunt, set up my booth to sell tshirts, etc…and they usually donate a portion of each admission to HAH. I also attend conventions, like Transworld Haunt Show in St. Louis or CreepyCon in Knoxville, TN, and spread the word that way and raise funds. Now that Haunters Against Hate is a full non-profit 501(c)3 corporation, tax deductible donations can be made via hauntersagainsthate.com.

Tell us about the events you host and how can people get involved?

I also, in 2021, had the first ever HAH: the Event, basically my OWN convention…a lot of work, but it was a small success for a first year event. It may not have been the biggest con out there, but everyone said they felt so welcomed and comfortable. I also had an HAH awards show where I gave a haunter an HAH Haunter of the Year award, for standing up to religious fanatics outside the haunt he worked at, a Legacy Award to actress Lori Cardille (star of George A. Romero’s “Day of the Dead) who is a huge advocate for HAH, and a memorial award (named after  beloved haunter Jesse McDonald) and that went to a haunter who encompassed Jesse’s attitude of acceptance for all. It was quite emotional and touching but that’s how I wanted the event to be….full of heart. There will be a second one in 2022 from July 8-10th in Lexington KY and you can go to HAHtheEvent.com to read about, buy tix, hotel rooms or register to be a vendor if you wish! 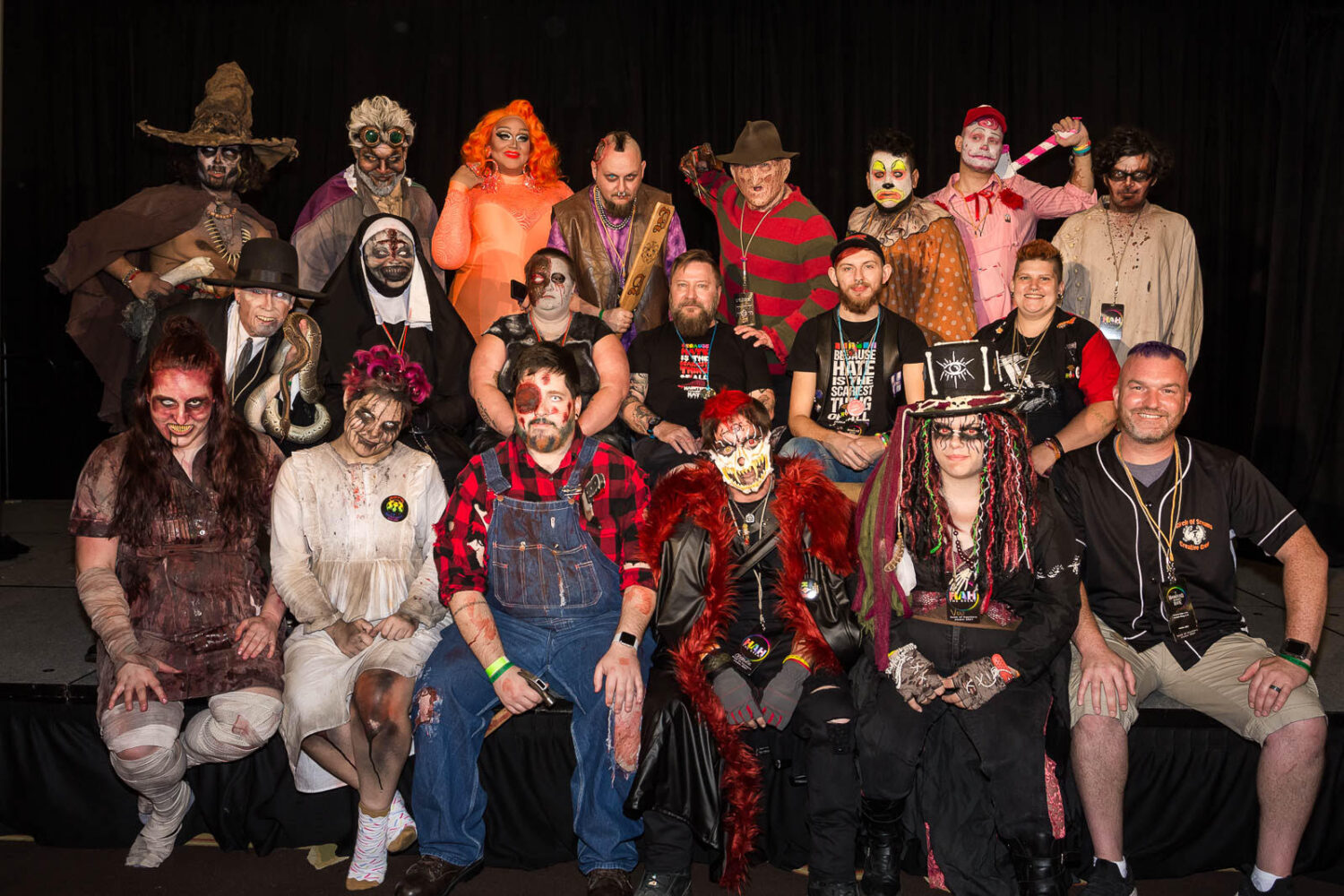 I understand you now have a scholarship program.  Tell us more about this, and how can people apply?

The HAH Scholarship Award was announced at the HAH Event….as a surprise to me from the other board members…who named it in my honor, which is humbling…but it’s really not about me…it’s about helping the kids. At HAH: the Event 2, a $2,000 award will be given to an LGBTQ+ student who is planning on a higher education degree in the arts. They can go to the Haunters Against Hate website and click on the scholarship tab to fill out an application. The winner will be announced in May.

Do you have any big events coming up you want to tell us about?

The goal in 2022 is to have HAH: the Tour where I can travel around the country and visit haunts (even in off season) and talk to the owners and post about it….and also to visit many of the LGBTQ organizations that HAH has donated to. Unfortunately, this got thrown a curve ball when I was in a head on collision this past weekend which totaled my vehicle due to a driver under the influence of drugs. So I’m not sure yet if this will happen…but I can hope. But HAH: the Event 2 is still a go and vendors have already signed up and the 2022 HAH Award recipients have been chosen…and there may be some surprise announcements soon about appearances. And of course HAH will be at Transworld Haunt  Show again in St. Louis on March 17-20. HAH was also chosen as the charity for the Texas Haunters Convention, which I will be attending, in Dallas in July. 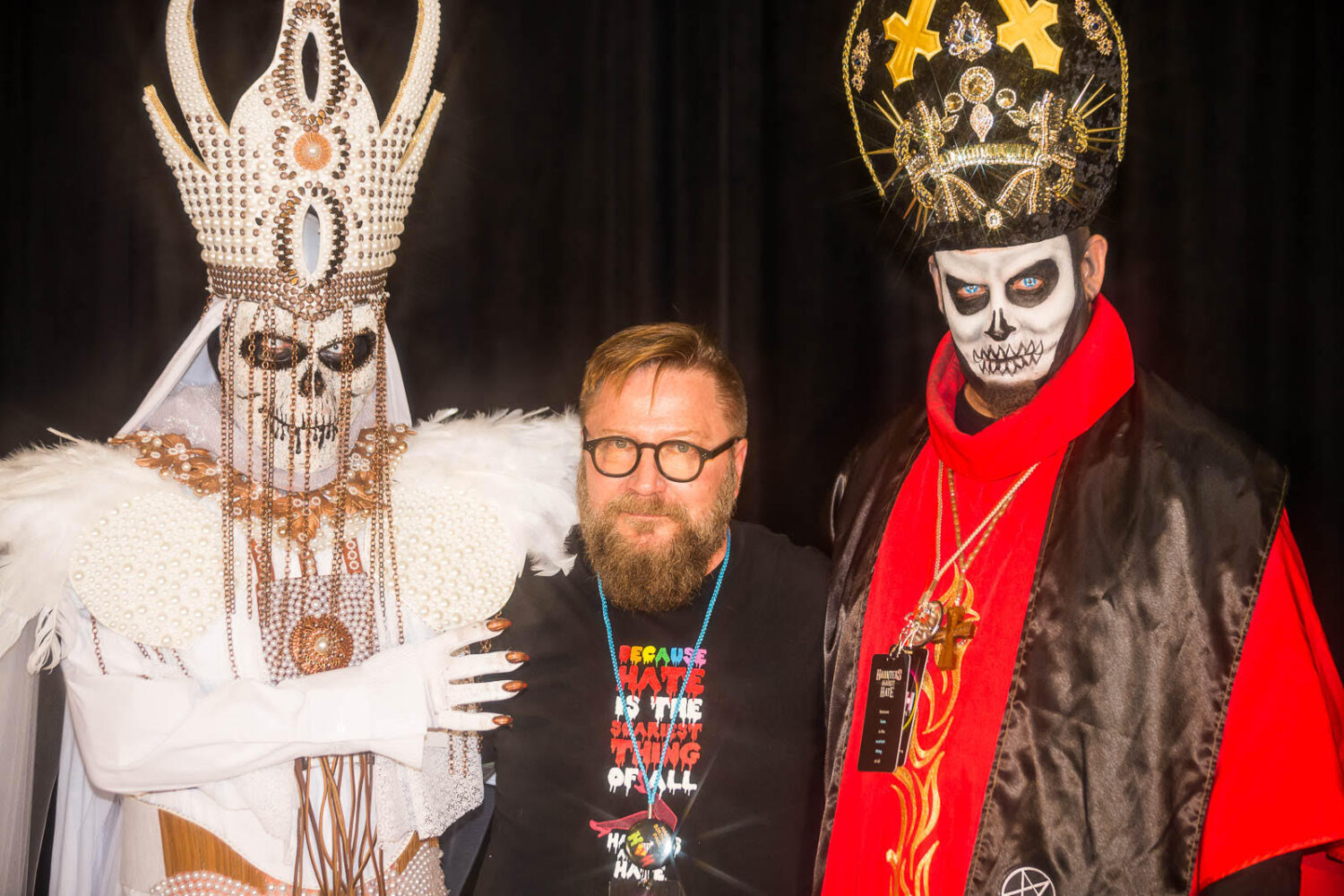 It’s been a long journey with HAH, and there are times I feel overwhelmed, but when I get that email from a teen, or a message from a parent, it makes all the hard work worth it.